You are here: Home / Reviews / Review of One Man’s Flag by David Downing 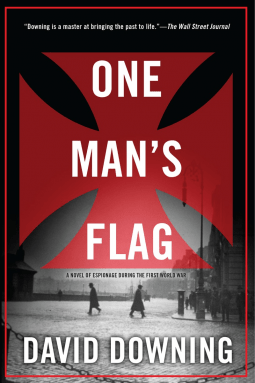 One Man’s Flag by David Downing is the second title in the Jack McColl series. It was preceeded by Jack of Spies (2014).

World War I is a decidedly difficult era for a modern espionage thriller. Most modern readers are less familiar with the full scope of the conflict. This is particularly true when the subject leaves the trenches of the Western Front and moves to Ireland and India. For those two countries, then under English rule, are the central points of conflict in the novel.

The modern spy very likely was created in the global frictions and intrigues surrounding World War I. For the contemporary reader, the history of First World War has been obscured by more recent scenarios of The Second World War and the Cold War. This fact presents some obstacles to a writer who sets out to write an espionage thriller set in that period. But there is a great deal of available history that supports the assertion that modern espionage began in World War I. The historian David Kahn, in his epic history of cryptography and cryptanalysis, The Code Breakers, retells of the first act of English offense in that war when on August 5, 1914, the British cable ship Teleconia dredged the North Sea off the coast of Emden, raised and severed the German Transatlantic cables. World War I was indeed the first conflict to to employ such tactics to interrupt enemy communication, and it was also the first conflict to utilize the airplane and radio.

It takes a skilled hand to present the world of 1915 to the modern reader, and David Downing demonstrates a rare talent in his fashioning of character and plot to present a realistic and engaging espionage story set in this now unfamiliar period. Downing paints a world in 1915 that is remarkably modern, though still struggling with questions of national determination and colonial rule, and the rights of women. Downing is adept at rendering this complex historical period and a reader might wonder if he hasn’t tried his hand at writing history before. And indeed, he has. In addition to the initial title in this series, Jack of Spies, Mr. Downing has written a number of other works of historical fiction, including the World War II era espionage thrillers in the John Russell series (Zoo Station, Silesian Station, Stettin Station, Potsdam Station, Lehrter Station, and Masaryk Station). He has also written two books of “alternative history”, and a variety of books on 20th Century history and political biography. According to the Soho Press, Mr. Downing has written nearly 80 books in his career.

Downing’s primary characters are Jack McColl, an Urdu speaking, British agent back in India on the trail of an Indian Nationalist Terrorist group suspected of colluding with the Germans to unsettle British rule. On the other side of the globe, McColl’s former lover, the suffragette Caitlin Hanley, an Irish-American journalist reacts to the execution of her younger brother for his role in an Irish Republican plot that was backed by Germany. Jack McColl was responsible for uncovering that plot.

What ensues is a fascinating and complex story told by two people on different ends of the world, separated by events in their common past, and a present that has rendered the whole world fragmented. Part espionage story, part love story, One Man’s Flag is a very enjoyable, complex story.

If you enjoy compellingly well-crafted historical fiction, and suspenseful stories of espionage and intrigue, you will enjoy this title (this series), very much. There are a few notable espionage stories of the First World War written in that era: John Buchan’s The Thirty-Nine Steps (1915) and Greenmantle (1916) are perhaps the most well-known examples. There are also a number of more recently written crime fiction series that are set during the First World War or in its immediate aftermath: Jacqueline Winspear’s Maisie Dobbs series, the Bess Crawford series by Charles Todd, and Anne Perry’s World War One series all bear mention. David Downing’s Jack McColl series sits very comfortably among these well-known First World War stories.

The Jack McColl books by David Downing deserves of 4.5 / 5 stars.